Main features of »sustainable energy system« are storage, production and consumption of energy in every micro grid cell. All these features could be controlled by macro grid operator to stabilize huge energy systems

Basic cell of »sustainable energy cycle« is a micro grid unit that can be a semi independent house, facility or even village or town. Those cells are mostly acting as an integral part of larger grid where operator controls energy flow to and from the cell according to the demand of grid and user. In certain circumstances each micro grid can also act as an independant off grid system

By increasing the energy capacity in the stationary batteries, we increase the capability of the energy storage, as it increases the efficiency of the photovoltaic system which can sustain itself for a longer periods without sun. This system can completely satisfy the energy needs of a house, if said house is a low energy user, or a vacation house, which is not used very frequently. It also reduces the cost of the stationary battery, as it is being used for the building as well as the vehicle.

We have presented the idea at WTN (World technology network summit) in New York in November 2015. Till 2019 we have been gradually building pilot facilities together with GEN-i d.o.o. . The project is still ongoing by collecting the data and improving the system.

Batteries are still the most expensive part of both storage system and electric car, so double use could significantly increase both range and storage when needed. At the moment most car producers use batteries that are far bigger then most people use for daily drive. At the same time most household storage systems serve just as buffers and not real storage due to high cost of batteries. Most of the Mo-Fri daily drives in EU 28 don’t exceed 50 km while weekend and holiday drives tend to be of greater distance. So the necessity of having a longer range is mostly limited to the time when family is not at home, what lowers the household electricity consumption at that time. Besides additional electric car batteries, some existing electric vehicles that are used only during summer season like Renault Twizy and e scooters and motor bikes, could be connected to Sustainable energy cycle directly thus boosting the available storage capacity without any additional work or cost.

Same system can also be applied to vacation houses that are used just for holidays or weekends and could be completely off grid basically having just a small 2 – 5 kWh storage battery connected to renewable energy sources for the time the house is not in use. When the owner arrives for the weekend, part of the electric car battery is connected to the system.

In case of an off grid or partly off grid community, multiple cars are connected to local or central storage system boosting its capacity during most of the time.

In the period from 2016-2018 we have been building a fully functional prototype of Sustainable energy cycle for a 2 family house of 7 people (5 drivers). Both families use only electric cars for daily, business, weekend and holiday driving. One of the electric cars (converted one) could be used in V2G manner boosting the overall storage capacity. The system is an “island” off grid micro grid that powers one two apartment private house and one business building where Metron has its Technical centre. This micro grid is not connected to the main electrical grid directly, but only through 3×3 kW AC chargers that are used to charge the battery during off peak hours in the period of the year when there is not enough sun (mainly from october to March). During the last 4 years, we have never used grid electricity during peak hours and we have never experienced power shortage that were quite frequent where we live due to extreme weather.

At 40 degrees latitude, a completely off grid island system needs a storage battery being 13% of annual energy consumption. So a 50 kWh storage battery would only be enough for 384 kWh annual energy consumption. Our sample sustainable energy cycle would increase storage to 75 kWh by using V2H technology, so it would be enough for 577 kWh annual consumption. It is enough for a weekend house or a very high efficient household. Sustainable energy cycle increases the efficiency of an island system for the same ratio as is the ratio between fixed storage and electric range extender storage. At today’s average storage batteries and EV batteries it would by average improve island system by 50%

Partly independent households or communities cover part of their energy needs by renewable power plants (PV or wind), while the rest has been taken from the grid. Especially during longer cloudy weather periods such systems lose efficiency due to low storage capacity. Table below is calculated for our sample system where during most of the months there is lack of electricity, so additional power has to be supplied from the grid. Using our sample system, we can store more energy, so during summer months we can completely cover all energy needs by PV, while during other months, we can adapt the demand for grid power according to peak and off peak hours determined by the grid operator. This sample system produces 8000 kWh of renewable energy annually and by adding additional car batteries and small cars to the system we could improve use of renewables for 32 % (time when renewable energy was available to power the house).

Larger systems to balance the grid:

Sustainable energy cycle could also improve efficiency of large systems that are being built lately to balance the grid cutting the peaks. peak shaving and load balancing is one of the main features we have been testing at “Obrezje sustainable energy cycle”. Total impact relates to the size of large system storage and number and size of electric range extenders in use at certain community. large amount of micro grid cells could absorb or release a lot of energy that can be produced in large renewable power plants.

Fun/leisure electric vehicles that are used mostly during periods of good and warm weather like Renault Twizzy, golf carts and scooters could be connected to Sustainable energy cycle directly. It would boost the available EU storage capacity during the time when most needed (winter) without much cost and effort.    18265 Renault Twizzy vehicles have been sold in EU till end of 2016. Twizzy is an open 2 seat vehicle used only in good weather when we have less need for storing photo-voltaic electricity. The total capacity of Twizzy’s in EU is 52,76 MWh considering its 6,1 kWh battery. Even if just one fifth of all those vehicles would be connected to storage systems, it would contribute to EU battery storage more than the biggest operational storage system in Feldheim, Germany having 10 MWh and costing 12,8 million €.

Battery system of those vehicles operates at same level then most commonly used storage systems for households (48 Volts DC nominal), so they could be connected without complex technical and financial investment. 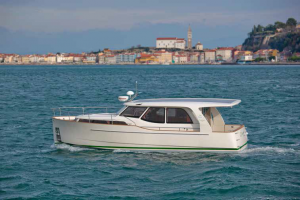 There is also a certain amount (1000-2000 and increasing) of electric and hybrid leisure boats parked during off season time (October-April) all around EU lakes. Each boat has a lithium battery of 10-30 kWh that could serve as storage preventing damage that is often caused at parked boats due to self discharge during off season. Due to 48V voltage they can be directly connected to the hybrid storage system (3 MWh at least).

Sustainable energy cycle could be replicated anywhere for households, weekend houses, remote farms, business facilities and communities. It seems to be very well socially accepted, as several independent environmental organizations have already supported our project: Alpe Adria Green, Bündnis Alpen Kovention Kaernten and Alpine Pearls. The most important step right now is that Sustainable energy cycle becomes recognized also by big car producers and grid operators, so that it could be built at a larger scale.

New York, NY (November 8th, 2015) – Today, Andrej Pecjak, was named a World Technology Award Finalist by the World Technology Network (“The WTN”) – a global community comprised of the most innovative people and organizations at the forefront of science and technology and related fields. Andrej Pecjak and has been selected as a finalist for category “Environment” for »Sustainable energy cycle«. Award winners will be revealed at the WTN’s 14th annual World Technology Summit & Awards event, held November 19-20, 2015, in the TIME Conference Center at the historic TIME & LIFE Building in New York City.

The World Technology Summit & Awards is a global gathering that brings together many of the world’s leading technologists, scientists, futurists, policymakers, entrepreneurs, and forward-thinkers for two days of talks, panel discussions and demonstrations that explore what’s groundbreaking, imminent, possible, and society-changing in emerging technologies. This year’s theme is “The Future: Who and What You Need to Know.”

Each year, the WTN recognizes the best and brightest in their fields and the organizations on the cutting edge of technological innovation. Recipients are voted on by their peers – the WTN Fellows, the winners and finalists from previous annual awards cycles – based on their outstanding contributions to technology, science and other related disciplines and the potential impact and long-term significance of their work. Thirty awards across all industries – from art and design to health and medicine to space – will be presented during a special black-tie awards gala on the closing night of the summit.

Manage Cookie Consent
To provide the best experiences, we use technologies like cookies to store and/or access device information. Consenting to these technologies will allow us to process data such as browsing behavior or unique IDs on this site. Not consenting or withdrawing consent, may adversely affect certain features and functions.
Manage options Manage services Manage vendors Read more about these purposes
View preferences
{title} {title} {title}