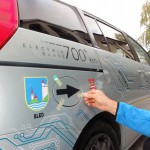 On 11th and 12th of October we drove from Bled in Slovenia till Dubrovnik in Croatia (726 km and 5000 to 6000 meters of uphill) using our car Metron 7, without charging. We drove at normal traffic speed (66 and 63 km/h average speed including short stops at border passes, construction works on roads, etc.). We were accompanied by Igor Kolovrat and a cameraman filming the whole trip in one car and one journalist and representative from Bled tourism in another car. At the end we had to drive another 10 km to marina where we got 3 phase charging socket. So actually we drove 736 km or 460 miles without charging and there was still energy for approx 15 km of flat road left. 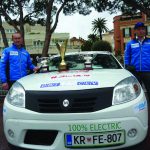